Why is the Wheat Genome So Complicated?

Posted on November 15 2013 by Colorado Wheat

When plant scientists talk about wheat breeding, they often say “Wheat is more complicated than corn or rice.” What does that really mean and why is it so?

Every cell in every living thing, plant or animal, contains deoxyribonucleic acid (DNA) which holds the instructions for all of the processes and parts of the cells.

DNA is organized into long structures called chromosomes. Because of the way different species have developed, some of them have more chromosomes than others.

The three genomes (A, B and D) of common bread wheat with each of the seven sets of chromosomes from each ancestor. The ancestors were each diploid (two sets of chromosomes) and came together in nature to produce hexaploid wheat.

For gene sequencing purposes, that means wheat has 21 different chromosomes to map, because they come in pairs.

While wheat has fewer pairs of chromosomes than humans, it has a greater number of genes, with an estimated 164,000 to 334,000 genes, compared to 20,000 to 25,000 genes for a human.  A gene is a stretch of DNA which holds specific instructions for an organism’s structure or function.

Rice, corn, and wheat all come from a common ancestor about 55 to 75 million years ago, but have changed significantly from each other since then. 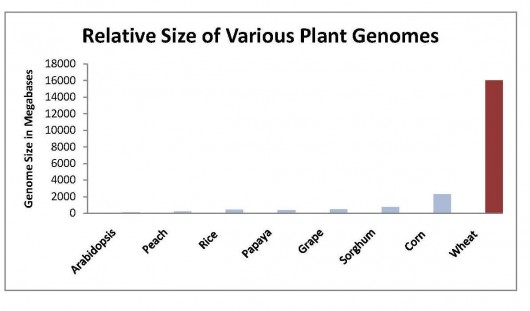 This graph shows the size of the wheat genome relative to the size of several plants whose genomes have already been sequenced or are currently being sequenced. Graph courtesy of James Schnable, PhD. candidate in Plant Biology, University of California/Berkeley, www.jamesandthegiantcorn.com.

“Wheat gets two copies of each set of chromosomes from each of its ancestors,” said Dr. Scott Haley, Colorado State University wheat breeder, “Each of those copies is different. They were all grassy species, so there is some similarity between them, but there are also differences.”

A genome is all of a living thing’s genetic material, the entire set of instructions for the creation and the function of an organism. Wheat has the largest genome among commonly grown agricultural crops.

Each of the sets of three wheat chromosomes is almost twice as large as the human genome and the entirety of the rice genome fits on just one half of one of wheat’s 21 chromosomes.

Breaking Down the Genome

The building blocks of DNA are base pairs. Each base pair is one rung on the DNA double helix (the double helix is like a spiral ladder), made of two nucleotides (structural units of DNA), and joined in the middle by a hydrogen bond. Each rung is a base pair.

The parts of the genetic structure, from smallest to largest.

Why is it important to sequence the wheat genome when plant breeders have made great strides in increasing yield and finding disease and insect resistance through traditional breeding methods?

The object of mapping the genetic code (or genome) of wheat is to find the location of genes that are beneficial through increasing yield, protecting the plant from insect or disease pressure, and other stresses such as drought, heat, and frost.

The Colorado Wheat Administrative Committee (CWAC) has supported the International Wheat Genome Sequence Consortium (IWGSC) with annual funding of $7,500 toward sequencing the wheat genome. The IWGSC is an international consortium of wheat growers, public and private breeders and scientists.

“We know sequencing of the wheat genome won’t happen overnight, but it is important to continue research on this project. When the genome is mapped, it will be a major breakthrough for wheat breeding, and will allow improvements in varieties to take place more quickly,” said Dan Anderson, Haxtun, CWAC president.

Several groups around the world are working on decoding wheat’s genetic sequence. A team of British researchers, funded by the Biotechnology and Biological Sciences Research Council (BBSRC), announced in August 2010 that they had sequenced the wheat genome. After an initial media frenzy, the wheat genome sequence released by the researchers has been described as unassembled raw data. At the time, the IWGSC said it “. . .strongly disagrees with implications that the sequence represent in any way the sequence of the wheat genome or that this work is comparable to genome sequences for rice, maize, or soybean.”

Dr. Pat Byrne, CSU professor of Plant Breeding and Genetics, said, “The ‘draft wheat genome’ contains sequences of many thousands of DNA fragments, but they are not assembled into a linear order corresponding to chromosomes. This limits its usefulness. Still, the ‘draft genome’ has been used by CSU post-doc Harish Manmathan, who works on the CWAC- and Colorado Wheat Research Foundation (CWRF)-funded project in novel trait development through TILLING (Targeted Induced Local Lesions in Genome). For example, based on reports of a gene related to drought tolerance in the wild mustard plant Arabidopsis, he used the Arabidopsis gene sequence to search the draft genome for similar sequences in wheat. He was able to verify that a variation of the same gene exists in wheat, but not how many copies there are or where the gene(s) are located.”

What does this mean for Colorado?

Knowledge of the location of helpful genes on the chromosome can help plant breeders more rapidly advance new traits and varieties to increase wheat yields to help feed a growing world population. When Colorado wheat farmers voted to increase the wheat assessment in 2007, increased research funding allowed CSU to start a new program: DNA-marker assisted selection. CSU is developing experimental lines with desired trait combinations using markers reported in scientific literature, and also working to identify other markers of interest in their own breeding program.

In traditional wheat breeding, two varieties of wheat are selected to be crossed because they both have desirable traits, such as insect resistance, high yield, or drought tolerance. The crossing is done by hand pollination. Wheat is a highly self-pollinating plant, so the pollen has to be removed by hand before it has a chance to pollinate the plant. Then, the plant is hand pollinated with pollen from the variety or line the breeder wants to cross with. The generation of plants that result from that cross is then inbred by self-pollination to produce a type that doesn’t change with more cycles of seed generation.

Increased knowledge of the wheat genome has allowed breeders to start using DNA marker-assisted selection in their breeding programs. DNA markers are identifiable DNA sequences, found at specific locations on the genome, and are either very close to or within the gene that confers a specific trait. They are transmitted by the standard laws of inheritance from one generation to the next.

DNA sequence showing a mutation that causes a higher level in amylose, which is similar to fiber with regards to beneficial effects on human health. This sequence-based analysis of single base mutations is the same concept CSU is using to look for other types of mutations, including increased drought, insect and herbicide resistance.

“This new method, if and when it is shown that it actually works, may revolutionize wheat breeding in the future,” said Haley.
“I am excited that we are on the cutting edge of this research and have the tools and funding resources necessary to see if it works!” Funding for this new initiative is provided by both CWAC and CWRF.

This entry was posted in Colorado Wheat Blog, News & Events, Your Research Dollars At Work. Bookmark the permalink.