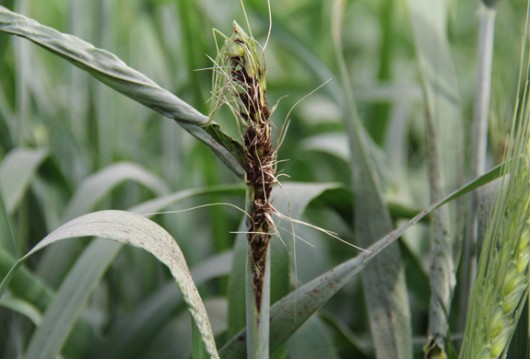 Problems with wheat smut are being reported in northeast Colorado. Here is some information about this disease.

Stinking smut (also called common bunt) can be a devastating disease of wheat, particularly in winter wheat grown in the Pacific Northwest. It is found infrequently in the High Plains Region. Infection levels over 20% were common in Washington in the early 1900s. Furthermore, between 25-50% of the Kansas wheat crop was lost to stinking smut in 1890.

Stinking smut releases dusty spore masses during harvest. Because of this, many “thresher” explosions have occurred. Static electricity that developed around the combine machinery ignited the spore dust released by the combine. In 1915, 160 such explosions were reported in Washington. One can visualize the panic that must have developed when a “thresher-combine” pulled by a 20-40 horse team caught fire in the middle of a wheat field from such a smut dust-induced explosion!

Today, losses from smut rarely occur unless a grower chooses not to plant treated seed. Stinking smut fungi survive between growing seasons as spores that are time and weather resistant (called teliospores). These spores typically rest on the surface of healthy seed or in the soil. These spores can remain dormant and alive in either location for a number of years, perhaps ten years or more, particularly if the spores remain dry on the seed surface.

Stinking smut spores germinate and begin to grow when the environment is favorable. Young smut fungus grow root-like threads (called hyphae) that penetrate into the tissues of young wheat seedlings. As the plant grows, the fungal hyphae also grow inside the wheat plant. The fungus keeps pace with the wheat plant’s growth and development. Eventually, the fungus cells replace the cells of the wheat seed, and as wheat kernels mature the smut fungus cells become teliospores. During harvest, the smut spores are released from infected heads as the heads pass through the combine used to harvest the grain. They contaminate other seed being harvested or are spread by the wind to the soil surface.

One of the greatest success stories in plant disease control is found in the use of chemical seed treatments for control of stinking smut. Early in the history of seed treatment, compounds containing copper, and mercury were used. In recent years, however, even more effective seed treatment compounds have been developed. Most of these are called “systemic” fungicides because they actually move systemically into and inside of the developing seedling to provide internal protection against the smut fungi. To date, no significant problems have occurred with the development of fungicide resistance in the smut fungi. Seed treatment is relatively inexpensive, very effective, and environmentally safe since very little of the active ingredient is applied per unit of land.

All current winter wheat varieties planted in the High Plains Region are susceptible to the two major seed borne smut diseases found here, loose smut and stinking smut. No resistant varieties have been developed for these two diseases in this region due to their infrequency.

The severity of stinking smut can also be manipulated by choosing a planting date when the soil temperature is above 68°F. This usually means early fall seeding for winter wheat. While this practice can reduce the incidence of smut, it rarely eliminates the disease altogether. Furthermore, several wheat diseases and insect pests are favored by early plantings.

Wheat growers who harvest grain for their own replanting or for re-sale as certified seed should consider fungicidal seed treatments especially this year for reducing disease risks.

Please contact Bruce Bosley for more information on this or other cropping systems or natural resource topics by my cell phone: (970)768-6449 or via email: bruce.bosley@colostate.edu.

From the Federal Grain inspection training. this is the determinant level of “smutty” wheat that qualifies for rejection:

“Smutty wheat contains, in a 250 gram portion, smut balls, portions of smut balls, or spores of smut in excess of a quantity equal to 30 smut balls of average size. Determine “smutty” on a dockage free portion of 250 grams. Smut balls also function as foreign material.”

Here are some references that provide more information on loose smut and common bunt:

This entry was posted in News & Events, Wheat Pest and Disease Update. Bookmark the permalink.