Wheat, from the time you plant it, until the day you harvest, often wins the fight against nature’s fury. Though not invincible, wheat, along with its producers, find creative ways to manage drought, severe temperatures, hail, disease, insects, high winds, and sometimes poor nutrition; to eventually yield an amazing grain that nourishes billions of people every day. Fairly recently, wheat has experienced a new resilient pest; the Wheat Stem Sawfly. 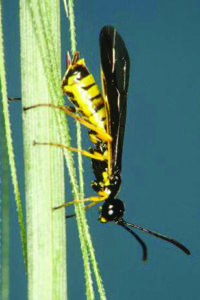 Today the Wheat Stem Sawfly find their way into our production systems through grassy roadsides, conservation reserve acres, and open grasslands. This shift from one grassy landscape to another has many scientists puzzled. It seems now this fly prefers wheat, infesting rapidly in large numbers. Colorado farmers are experiencing an incredible shift in fly populations, seeing fields once standing beautifully at harvest, to now flat on the ground from the feeding of fly larvae in the stem.

As I scout wheat fields across this state, I am finding more and more fields on the ground from this pest. In the beginning, new infested fields show most severe cutting on the edges. After consecutive years with surrounding old wheat stubble, fields become completely infested and flat as a pancake. Sawfly have been found damaging wheat in most northern counties of Colorado, with more severe hot spots in Weld, Morgan, Washington, Adams, and western Yuma County. This fly is not leaving, so solutions need to come swiftly to wheat farmers across the central high plains, or wheat in this region will struggle to survive.

Thankfully one solution hit the marketplace to reduce the damage from this pest, and that is stem solidness of new wheat varieties. Many public universities, including Colorado State University, are breeding stem solidness into wheat to reduce the impact of feeding larvae in the spring. As I look at these new varieties, I am finding reduced cutting, and stubble that retains most of its integrity through harvest. One benefit I hope farmers realize is stubble standing through subsequent cropping seasons. If more solid stubble can stick around longer and not blow away, moisture will be captured, soil erosion will be reduced, and new spring seedlings will be more protected through early development. The value of this solidness trait lies not only in harvestability of wheat, but the integrity and longevity of wheat stubble.

This fly is still feeding on solid stem varieties, so what impact to grain quality and yield are they having? So far, stems that have feeding have some small and/or shriveled kernels with variable discoloration. If these flies are threatening the tissue inside the stem, I would think nutrient movement, and starch and protein development in the grain is compromised. Time will tell what lasting impact these dynamics will have to our wheat industry. My hope is that wheat research and the farmer-scientist relationship grow stronger, to continue to work toward solutions like stem solidness, that make our wheat country thrive.

How do I know if I have wheat stem sawfly in my field and what do they look like?
Starting in early to mid-May, look for small yellow and black wasps on wheat plants along the edges of the field. Resting sawflies will sit on the stem facing the ground. There are insects that are similar in appearance, but they would not have this resting posture or be abundant in field edges.  In mid to late-June, stems can be cut open to look for the white, S-shaped larvae or the sawdust-like material resulting from their feeding. Near harvest, look for lodged stems in field margins.
What do wheat stem sawfly larvae look like? In mid to late-June through harvest, white, S-shaped larvae can be found feeding inside stems of wheat. After harvest, fully grown larvae will be found in what is left of the stem below where it was cut. They will remain here until the following spring.
What does wheat stem sawfly damage look like?
Before the stems dry, you can find evidence of feeding and tunneling, as well as the sawdust-like material resulting from their feeding. When the larvae finish feeding they cut the insides of the stems near the soil, making them prone to lodging, especially after strong winds. Unlike stems lodged from other causes, cut stems are no longer connected to the plant.
How and where do wheat stem sawfly survive the winter?
As the larvae mature they move down to soil level and cut a V-shaped notch around the interior of the stem. They then seal the interior of the stem just below this cut with silk and excrement to form an overwintering chamber. The upper stem often breaks at the cut just prior to harvest. The larvae overwinter in these chambers, just below soil level.
Are there weather conditions that favor wheat stem sawflies?
The parasitic wasps that attack wheat stem sawflies do better in cool, wet conditions, so drier conditions tend to favor the sawfly. Also, there tends to be more movement out of overwintering sites and egg laying activity during warm, dry periods following a rain.
Do we find wheat stem sawfly in all wheat producing counties?
Yes, wheat stem sawfly occurs in all wheat producing counties in Colorado, at least in non-cultivated grasses. Damage to winter wheat has yet to be observed in a few counties. Most damaging infestations have been found in north central CO, with a few lighter infestations occurring as far south as Baca County. Economically significant infestations are spreading to the south and east.
Where are the wheat stem sawflies coming from?
The wheat stem sawfly is native to Colorado. Until recently, it inhabited only non-cultivated grasses. It recently started adapting to feeding on winter wheat, becoming our most important insect pest of wheat in the process.
Why are we starting to have wheat stem sawfly problems now?
There is no good answer to this question, but it likely is due to some combination of the changes in the wheat stem sawfly’s preference for wheat, changes in production practices (e.g., reduced tillage), and changes in climate.
How fast can wheat stem sawflies spread?
They’re already here, what’s spreading is a change in behavior. According to CSU survey results, damage in wheat was mostly limited to the New Raymer area in 2012. By 2015 it had been found infesting wheat as far south as Baca County and as far east as Sherman and Wallace counties in Kansas.
Can we predict wheat stem sawfly infestations ahead of time?
According to Canadian guidelines, greater than 10-15% cutting in stubble indicates that adjacent fields should be planted to something other than wheat or to a resistant variety.
How do I prevent wheat stem sawfly infestations in my wheat?
Current preventive measures include planting resistant varieties, reducing the amount of wheat in your rotations to avoid planting new wheat next to previous crop stubble, and planting larger blocks to minimize the relatively severe infestations found in field edges.
What rotation crops can reduce the level of wheat stem sawfly infestation?
None of the common rotational crops (corn, proso millet, sorghum, sunflower) are affected by wheat stem sawfly. It is very important to plan rotations so as to avoid planting new wheat immediately adjacent to stubble infested during the previous crop.
How long do I have to stay out of wheat to reduce the problem so I can go back to wheat with minimal loss of yield?
Wheat stem sawfly infests a wheat crop in May and June and will remain in the stubble from that crop until the following spring.  At that time they will disperse from the field looking for new wheat to infest, so that field could be planted to wheat that fall without risk of infestation by the sawflies that infested that field the previous year.  However, sawflies from adjacent fields or from even greater distances may infest this new crop.
How effective is tillage in controlling the wheat stem sawfly?
Both fall and spring tillage have been used to expose crowns containing overwintering larvae to moisture and temperature extremes. However, if just 10% of the larvae survive this treatment, infestations will be similar to the previous season, and tillage rarely causes this level of mortality. Also, tillage will negatively impact the natural enemies that attack wheat stem sawfly.
Are there varieties that are resistant to wheat stem sawfly?
The available highly resistant varieties, none of which are adapted to Colorado, have a trait called “solid stem”. CSU has released a moderately resistant variety, Fortify SF, a medium maturity variety with wheat curl mite resistance and a similar yield potential to Byrd under normal field conditions. It is not highly resistant because it has only a semi-solid stem, however, it is substantially more resistant than other locally adapted hollow stem varieties.
What is known about the consistency of expression of stem solidness, or degree of resistance conferred by the new semi-solid varieties?
Reports from Montana and Canada suggest that certain environmental conditions, such as lower light intensity from increased cloudiness or lower elevation, may result in reduced expression of solidness. We do not yet know for certain how much of an issue this will be here in Colorado with our higher light intensities. The level of expression of semi-solidness observed has provided significant reduction in stem cutting in field trials.
How much “yield drag” should we expect with the new semi-solid varieties?
In three years of field trials (2016-2018) grain yield of the new semi-solid lines has been roughly equivalent to the yield observed with Byrd and Denali varieties, about  6-7% lower yield than leading varieties.
Does the wheat stem sawfly have any natural enemies? 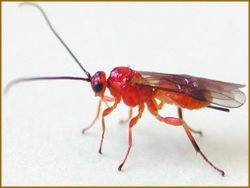