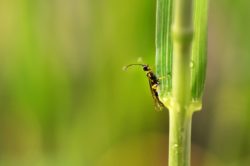 Wheat stem sawfly (WSS) is a native grass-feeding insect belonging to the order Hymenoptera alongside ants, bees, and wasps (Fig. 1). The name sawfly comes from the saw-like appearance of the ovipositor, which the females use to lay their eggs in plants. The WSS is the most important pest of wheat in North America. In Colorado, yield losses range from 20-50%, resulting in annual economic losses conservatively estimated at $30 million. Solid stem varieties that reduce cutting have proven to be the most effective way to manage WSS. However, there are reports that suggest sawflies may be adapting to stem solidness. In addition, the solid-stemmed cultivars are not preferred by growers because of low yield relative to hollow-stemmed cultivars (about 10% reduction relative to top yielding cultivars) and inconsistent solidness expression.

In 2020, Dr. Nachappa, Assistant Professor of Entomology at CSU, and colleagues teamed up with scientists at the Wheat Genetics Resource Center (WGRC) at Kansas State University to evaluate new sources of resistance in wild wheat relatives that can enhance development of WSS-resistant varieties. This project was funded by the National Science Foundation-Industry university collaborative research center (NSF I/UCRC) grant, which includes Colorado Wheat Administrative Committee. We screened 60 wheat lines from six species of wild wheat using a novel screening approach where plants were grown in cone-tainers in the greenhouse and placed in previous WSS-infested wheat fields during peak WSS flight (Fig. 2). Each species was screened to assess attractiveness, larval development, and infestation rates (whether larvae were present in the stem or not). This method allows us to test natural infestation of WSS under field conditions and test wheat lines side-by-side on the same day thereby avoiding variation due to weather conditions.

We found Aegilops tauschii (a goatgrass) and Triticum urartu (a wild einkorn wheat) consistently had fewer eggs, smaller larvae, and less infested stems. These species contain potentially novel WSS resistance genes that have never been accessed before and can be leveraged to combat WSS. 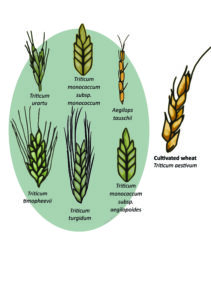 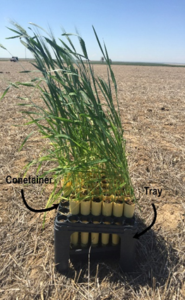 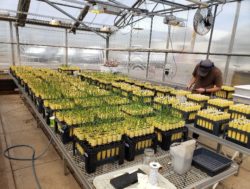 To complement the cone-tainer screening, we collaborated with Dr. Scott Haley from the CSU Wheat Breeding Program to evaluate wheat lines developed by the WGRC with wild wheat relatives as part of their pedigrees. In the field screening method, plants were visually assessed for the number of cut stems per plot. Previous research has shown field observations are similar to infestation rates in the cone-tainer trials. The field screening identified lines with A. tauschii as part of their pedigree had less cutting than other lines. These results support findings of the cone-tainer. We plan to repeat the study again this year in collaboration with Dr. Esten Mason.