DISEASE OBSERVATIONS
No disease observations have been made at this time. Not much has changed in drought or crop conditions over the last two weeks. 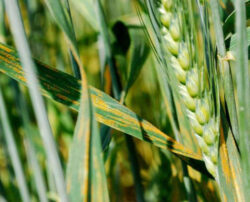 Figure 1. Stripe rust symptoms on wheat. Spores are bright yellow-orange and typically appear in “stripes” along the leaf veins. In younger plants, “stripes” may be less apparent due to less defined veins. Photo: Erica Arcibal.

Stripe rust disease (Figure 1) is dependent upon cool, wet weather. From past epidemics in Colorado, we know that: 1) The spores blow up to Colorado in wind currents from the southern states during severe disease. Pathogen overwintering is not thought to be a significant driver of disease in Colorado because the spores overwinter poorly here. 2) The pathogen requires cool, wet weather that leaves free-standing water on leaves. Dew and snow are typical sources of free-standing water. High soil moisture conditions are correlated with higher stripe rust incidence. In the 2015 stripe rust epidemic in Colorado, stripe rust was observed early (in April), so the initial inoculum was able to reinfect many times in the growing season which contributed to the epidemic.

Because 100% of the state is currently under abnormally dry conditions, stripe rust will likely be limited. However, since some parts of the state saw more snow and cooler weather last week, it is possible stripe rust may start to appear. As the disease progresses in the south, be watchful of your local weather conditions and take note of any extended periods of cool, wet weather. Be sure to scout carefully as weather varies across sites, and some areas may be more disease-conducive to stripe rust. When scouting, be sure to look throughout the entire canopy since older leaves (in the lower canopy) may show symptoms sooner than younger leaves. Infection of the flag leaf causes the most severe yield losses, so be especially vigilant in scouting about 10-14 days before flag leaf emergence. Please feel free to email photos if you think you might see stripe rust.

Tan Spot
Tan spot can start to appear this time of year. The fungal pathogen favors cooler temperatures and heavy moisture. Typically, as the weather gets warmer, tan spot disease no longer progresses. Tan spot is usually observed in fields with high amounts of wheat residues on the soil surface, as the fungus overwinters in these residues. When scouting, look for symptoms in the lower canopy (older leaves). Symptoms appear as small, round or diamond-shaped brown lesions that can be surrounded in a yellow halo. 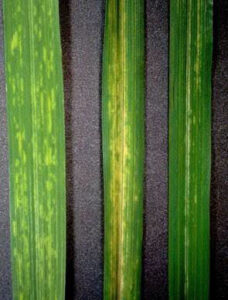 Viruses
USDA plots in Western Kansas (Lane County) have been found with high populations of wheat curl mites on the variety Guardian, and there are also some reports of virus symptoms on varieties Byrd and Avery in Kansas. This may suggest that mites are overcoming the resistance in these varieties. Wheat curl mites vector viruses, including Wheat streak mosaic (WSMV), Triticum mosaic (TriMV), and High plains wheat mosaic (HPWMoV). There are no pesticides that are effective against mites, so controlling volunteer wheat, which harbor mites, is the best management practice (see the Wheat Entomology Newsletter– link below– for more details about wheat curl mites). If you believe you see virus symptoms (Figure 2) on resistant varieties, please feel free to send me pictures.