General observations
The weather in Colorado started off very dry, then rainfall caught up in May and ended with a drier June, with some areas of the state getting some much needed rainfall this past week. Overall, the weather this year favored an increased incidence and severity of several fungal diseases in Colorado. Viruses were also present, with Triticum mosaic virus (TriMV) being much more common and found at higher levels relative to Wheat streak mosaic virus (WSMV). This could suggest that viral populations may be shifting to higher incidence of TriMV over WSMV. My lab plans to investigate this further.

Now is the time to start thinking about which varieties to plant for next season (see link for variety decision table at the end of this newsletter). If you had significant disease problems, consider choosing resistant varieties if they are available. Controlling volunteer wheat this fall will also be critical in helping to control TriMV, because the genetic resistance used against WSMV does not work against TriMV. Volunteer wheat harbors the mites that transmit both WSMV and TriMV, so mitigating volunteer wheat is the best control we currently have against TriMV. Managing soil residue will also help control many fungal diseases since fungi can overwinter in residue and emerge in the spring.

Many thanks to all those who contributed to the Wheat Disease Newsletters this season! The full list of contributors is available at the end of each newsletter, but I would especially like to thank Dr. Wilma Trujillo, Ron Meyer, Todd Ballard, Dr. Esten Mason, Brad Erker, and Dr. Ana Cristina Fulladolsa Palma and her team at the Plant Diagnostic Clinic for their regular contributions and support this year. 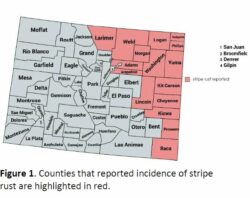 Stripe Rust was first reported at the end of May (May 24th newsletter) and found across Eastern Colorado through June. (Figure 1). In most cases incidence and severity was low, but moderate severity was observed in Lincoln county. As temperatures consistently increased, stripe rust disease was mitigated. 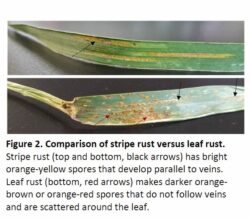 Leaf rust was found at very low levels in several Eastern counties, often coinciding with stripe rust. While stripe rust and leaf rust are both ‘rust’ diseases, they are caused by two different fungal pathogens and cause different symptoms (Figure 2). Leaf rust usually shows up a little later in Colorado and is usually mitigated when the temperatures increase, so it is not typically a major disease problem compared to stripe rust. This is also what we observed for 2021. 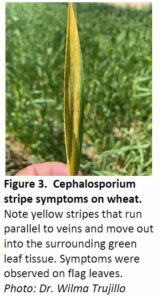 Sedgewick, and Phillips counties (Figure 3). This year we found higher incidence and severity of this disease compared to previous years, likely because we had unusually extended cool, wet weather at the end of May-early June that was favorable to disease development.

Tan spot was observed in several counties, and in some cases on the flag leaves (Figure 4). Tan spot appears as necrotic (dead, brown) spots inside diamond-shaped yellow halos or borders.

The extended cool, wet weather was favorable for tan spot disease development this year. Higher incidence of tan spot was typically observed in fields with high levels of wheat residue on the soil surface.

high levels in a majority of symptomatic samples we have tested this year, with WSMV and HPWMoV detected at low levels and not in all samples. This could suggest that the virus population may be shifting towards more TriMV pressure since WSMV resistance has been implemented well in Colorado. We plan to monitor TriMV levels in the coming years and investigate why TriMV was a bigger problem this year. 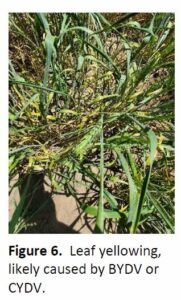 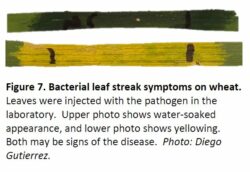 typically does not severely impact yield in Colorado because it appears later in the season, BLS can be seed transmitted. Major domestic/international brewing companies have zero tolerance for BLS in barley seed since there is no resistance.

Stagonospora leaf and glume blotch was found in Prowers and Kiowa counties and is caused by a fungus (Figure 9). Wet, rainy weather, high humidity, and moderate temperatures (~68-75°F) favor disease development. The 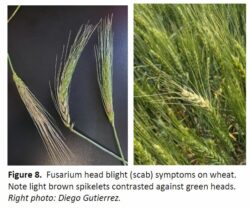 fungus survives in infected residue.
Typically, Stagonospora does not cause significant yield losses in Colorado, but the weather this year was favorable for disease development.

Alternaria leaf blight was found in Prowers and Weld counties and is caused by a fungus. The ‘hallmark’ for the disease is the presence of small, black fungal structures (called conidia) which cover the leaf lesions under wet conditions (Figure 9). The fungus is both seedborne and soilborne, and disease develops under cool, wet conditions. Alternaria does not typically cause significant yield losses in Colorado, but the weather this year was favorable for disease development.

Anthracnose leaf blight was found in Prowers county and is caused by a fungus. In Colorado, we mainly observe symptoms on leaves, but it can also be found on grain, heads, and stems (Figure 9). Disease develops under high humidity and warmer temperatures. The fungus can overwinter in residue (especially corn) and infect plants in the spring. In Colorado, Anthracnose is not typically a major disease problem, but the wet, hot weather in early June favored disease development.

Do you have a disease that you would like diagnosed? Contact the Plant Diagnostic Clinic for sample submission: https://plantclinic.agsci.colostate.edu/ or plantlab@colostate.edu.

Many thanks to all who contributed to this report: Dr. Wilma Trujillo, Ron Meyer, Dr. Esten Mason, Brad Erkerand Dr. Ana Cristina Fulladolsa Palma and her team at the Plant Diagnostic Clinic.